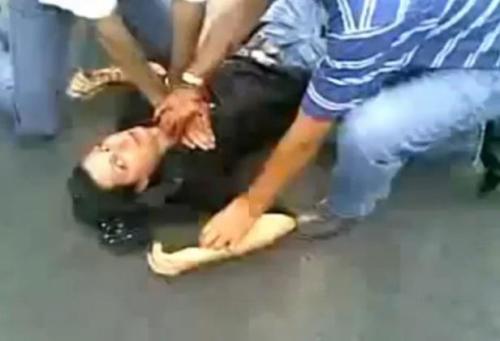 News blog at The Times:

Iranian mourners are marking the death of Neda Soltan this afternoon, 40 days after she was shot dead in Tehran. Foreign journalists are banned from reporting inside Iran but we are trying to gather as much information as possible.

– Riot police have beaten or arrested many of the mourners gathered at the cemetery where Neda is buried.

– CNN are reporting that the Basiji are videoing the mourning protesters

– The Los Angeles Times has a witness who says: “thousands and possibly tens of thousands of mourners, many of them black-clad young women carrying roses, overwhelmed security forces today at Tehran’s largest cemetery.”

Police barred opposition leader Mir Hossein Mousavi from joining the crowd around the grave of Neda Agha Soltan, a young woman was shot to death at a June 20 to protest the disputed presidential election. The 27-year-old music student’s dying moments on the pavement were filmed and circulated widely on the Web, and her name became a rallying cry for the opposition.

“Neda is alive, Ahmadinejad is dead,” some of those at the ceremony chanted, referring to President Mahmoud Ahmadinejad, who the opposition claims won the June 12 election by fraud. Witnesses said plainclothes forces charged at them with batons and tear gas, some of them chanting, “Death to those who are against the supreme leader.” State television also reported that police used tear gas to disperse the demonstrators.

Update | 10:56 a.m. The Iranian blogger Mojtaba Samienejad writes on Twitter that there have been clashes in Tehran on Thursday. Minutes ago he wrote: “Intense conflict between people and police & Basijs in Abbasabad ST With throwing tear gas.”

Update | 10:53 a.m. Reuters reports that a witness in Tehran says that police and “at least 2,000 people have gathered” at Tehran’s Grand Mosala, a prayer location where tens of thousands can gather. Opposition leaders asked for and were denied permission to hold a mourning rally at this location today.

Two posts of tweets from Sully, here and here.

The stories covering today’s events are breaking now — but not all reports agree on the extent of the police reaction. And one analyst notes that reports and demonstrations do not necessarily add up to the kind of revolution suggested by mainstream and new media stories, posts and headlines.

Kevin Sullivan at HuffPo on the bigger picture

For more than a thousand years, the Persian language has been both a vessel of Persian nationalism and a tool for fighting Islamo-Arab influences. Islamists have long believed Arabic to be the “perfect” language, the one Allah used when he spoke with Adam and Eve in heaven and when he revealed divine truths to Mohammad on earth. In recognition of this sanctity, Iranian Islamists have tried to infuse the Persian language with Arabic words and grammar. Before the revolution, Islamo-Arabic names–Mohammad, Hassan, Hussein, Ali, Reza–were prevalent amongst every strata of Iranian society; in the last two decades, a new generation of Iranian parents have showed their disdain for the status quo and its ideology by rejecting Islamic names in favor of others that are purely Persian and secular in their connotations. And so it is with Neda–a Persian name, meaning “the clarion call,” or “the voice.”

When, in the early 1920s, her grandparents, like all Iranians, were presumably ordered by the government to pick a family name, they could not have imagined that the surname they picked, 75 years later, would become a potent metaphor of Supreme Leader Ali Khamenei’s autocratic rule. Agha, a Mongolian term picked up by the Arabs, means sir or master; it is also used by Khamenei’s inner circle to refer to him. The clerical cognoscenti referred to his predecessor, Ayatollah Khomeini, as Agha as well.

The term Agha-Zadeh, meaning “son of an Agha,” has in recent years come to refer to the thousands of children of the clergy, now millionaires and billionaires, who use their fathers’ connections to rapidly and illicitly enrich themselves. Today, Mojtaba, Khamenei’s son, is the most infamous Agha-Zadeh. According to the Guardian, he has more than 1.7 billion pounds in his personal account, which the British government, according to this report, has now frozen. Mojtaba is one of the masterminds of the electoral coup of June 12, as well as one of the main culprits in rigging Ahmadinejad’s first presidential victory four years ago. Many Iranian democrats worry that the Khameneis, father and son, are emulating North Korea not just in its nuclear program but also in their succession scheme.

The third part of Neda’s name, “Sultan,” is Arabic for an absolutist ruler, as in the Ottoman Empire. It also conjures up Max Weber’s theory of Sultanist regimes, in which one man has absolute domination over society’s every political domain.