Where Will Harold Ford Go Now? 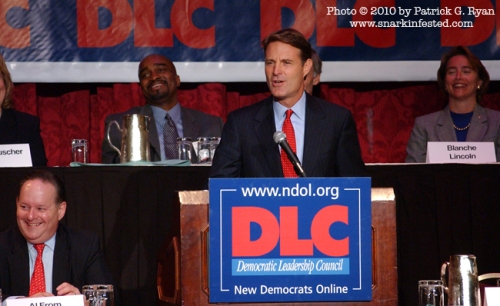 The Democratic Leadership Council, the iconic centrist organization of the Clinton years, is out of money and could close its doors as soon as next week, a person familiar with the plans said Monday.

The DLC, a network of Democratic elected officials and policy intellectuals had long been fading from its mid-’90s political relevance, tarred by the left as a symbol of “triangulation” at a moment when there’s little appetite for intra-party warfare on the center-right. The group tried — but has failed — to remake itself in the summer of 2009, when its founder, Al From, stepped down as president. Its new leader, former Clinton aide Bruce Reed, sought to remake the group as a think tank, and the DLC split from its associated think tank, the Progressive Policy Institute.

But Reed left the DLC last year himself to serve as Vice President Joe Biden’s chief of staff, leaving Ed Gresser, a trade expert, to lead the group in the interim. Since then the board “hasn’t been able to find someone who wanted to come on in a permanent capacity,” a person familiar with the group’s woes said, with the central problem the difficulty of raising money for a Democratic group that isn’t seen as an ally of the White House.

Gresser declined to comment on the DLC’s future, and referred a call to From, who didn’t immediately respond to a message left with an assistant.

It’s hard to remember, but the whole rise of the progressive netroots was organized around opposition to the DLC, which liberals saw as Satan incarnate. Bill Clinton was an early member, and the DLC helped frame his presidential candidacy.

I always had mixed feelings about the group. I think it was about half innovative effort to counterbalance traditional Democratic interest groups, and half naked effort to suck up to corporate America and/or give contentless messaging cover to red state Democrats.

But for the main part, the DLC disappeared because its work was over. The remaking of the Democratic Party begun by Clinton held in place. The DLC floundered because it had nowhere else to go — having moved the party to the center, it could only advocate for the party is it stood in the Clinton and post-Clinton era, or advocate that it move further still toward the center. It became a an anachronism.

What it hasn’t been able to do is adapt to success. It hasn’t mended relations with liberals, so it never could become the all-purpose Democratic think tank and holding pen that the Center for American Progress is. Its policy shop and messaging shops got a bit stale, which allowed upstarts like Third Way to pass it in influence. It continued picking fights with people like Howard Dean and Markos Moulitsas, which meant that when it got headlines, they weren’t necessarily good ones. It hasn’t nurtured and held onto the young talent that could help it build new constituencies or really update its thinking. It never figured out the Web.

But if I were Al From, the organization’s founder, I’d feel pretty good about myself. For better or for worse, the DLC won. That’s why potential donors and others are now comfortable letting it die.

More prosaically, the DLC did something in 2006 to permanently alienate them from virtually the entire party: they endorsed Joe Lieberman’s re-election bid. Lieberman’s stalwart support for the war in Iraq and for President Bush was just about the biggest sin of all to Democrats of the era. Some issues are zero sum, and the DLC found itself on the wrong side of history, as least as far as the Democratic Party was concerned.
There are two other factors worth mentioning. One was that Big Labor became all the more important to helping Democrats get out the vote, and that made it more difficult for Democrats to affiliate with the DLC. The second was that the Netroots — Atrios and Daily Kos and Chris Bowers — thought the DLC’s “centrism” was equivalent to the politics of concession and compromise.
No question: the Netroots and progressive left are at the center of gravity for the Democratic Party as an institution. There is a distinction, though, between energy and influence. And it still isn’t clear how Democrats win the election without galvanizing the type of voters the DLC sought to attract. The group may be going away, but debates about its ideas will dominate politics for a long time to come.

The truth of the matter is that the DLCs function has been taken over by Third Way. Nobody needs to fear that the centrists aren’t going to be well represented in the Democratic Party. They run the place.

Way back in 2005, Markos Moulitsas of the liberal Daily Kos was quite irked with the centrist Democratic Leadership Council, and declared:

Two more weeks, folks, before we take them on, head on. No calls for a truce will be brooked. The DLC has used those pauses in the past to bide their time between offensives. Appeals to party unity will fall on deaf ears (it’s summer of a non-election year, the perfect time to sort out internal disagreements). We need to make the DLC radioactive. And we will. With everyone’s help, we really can. Stay tuned.

He was going to make them “radioactive.” To think, if a conservative had said it, it would be considered encouraging dirty bomb attacks.

We scoffed. But no more. Apparently Kos really has perfected the promised radioactive superweapon. Ben Smith:

The Democratic Leadership Council, the iconic centrist organization of the Clinton years, is out of money and could close its doors as soon as next week, a person familiar with the plans said Monday…  Its website currently leads a Harold Ford op-ed from last November, titled, “Yes we can collaborate.” It lists as its staff just four people, and has only one fellow. Recent tax returns weren’t immediately publicly available, but returns from 2004-2008 show a decline in its budget from $2.6 million to $1.5 million, and a source said funding further dried up during the financial crisis that began nine months before Reed took over.

Could the long-promised superweapon be real? I felt a great disturbance in the Force, as if millions dozens of centrist Democrats suddenly cried out in terror and were suddenly silenced