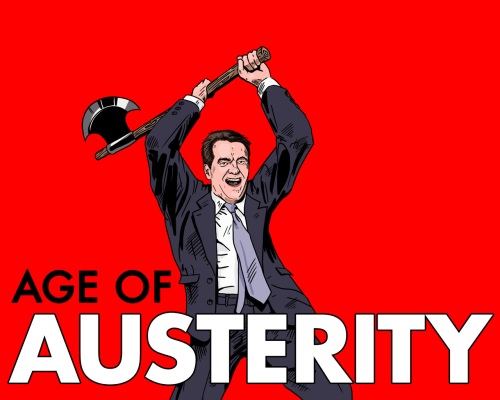 Remember the German economic boom of 2010?

Germany’s economic growth surged in the middle of last year, causing commentators both there and here to proclaim that American stimulus had failed and German austerity had worked. Germany’s announced budget cuts, the commentators said, had given private companies enough confidence in the government to begin spending their own money again.

Well, it turns out the German boom didn’t last long. With its modest stimulus winding down, Germany’s growth slowed sharply late last year, and its economic output still has not recovered to its prerecession peak. Output in the United States — where the stimulus program has been bigger and longer lasting — has recovered. This country would now need to suffer through a double-dip recession for its gross domestic product to be in the same condition as Germany’s.

Yet many members of Congress continue to insist that budget cuts are the path to prosperity. The only question in Washington seems to be how deeply to cut federal spending this year.

If the economy were at a different point in the cycle — not emerging from a financial crisis — the coming fight over spending could actually be quite productive. Republicans could force Democrats to make government more efficient, which Democrats rarely do on their own. Democrats could force Republicans to abandon the worst of their proposed cuts, like those to medical research, law enforcement, college financial aid and preschools. And maybe such a benevolent compromise can still occur over the next several years.

The immediate problem, however, is the fragility of the economy. Gross domestic product may have surpassed its previous peak, but it’s still growing too slowly for companies to be doing much hiring. States, of course, are making major cuts. A big round of federal cuts will only make things worse.

So if the opponents of deep federal cuts, starting with President Obama, are trying to decide how hard to fight, they may want to err on the side of toughness. Both logic and history make this case.

Let’s start with the logic. The austerity crowd argues that government cuts will lead to more activity by the private sector. How could that be? The main way would be if the government were using so many resources that it was driving up their price and making it harder for companies to use them.

In the early 1990s, for instance, government borrowing was pushing up interest rates. When the deficit began to fall, interest rates did too. Projects that had not previously been profitable for companies suddenly began to make sense. The resulting economic boom brought in more tax revenue and further reduced the deficit.

But this virtuous cycle can’t happen today. Interest rates are already very low. They’re low because the financial crisis and recession caused a huge drop in the private sector’s demand for loans. Even with all the government spending to fight the recession, overall demand for loans has remained historically low, the data shows.

Similarly, there is no evidence that the government is gobbling up too many workers and keeping them from the private sector. When John Boehner, the speaker of the House, said last week that federal payrolls had grown by 200,000 people since Mr. Obama took office, he was simply wrong. The federal government has added only 58,000 workers, largely in national security, since January 2009. State and local governments have cut 405,000 jobs over the same span.

The fundamental problem after a financial crisis is that businesses and households stop spending money, and they remain skittish for years afterward. Consider that new-vehicle sales, which peaked at 17 million in 2005, recovered to only 12 million last year. Single-family home sales, which peaked at 7.5 million in 2005, continued falling last year, to 4.6 million. No wonder so many businesses are uncertain about the future.

Without the government spending of the last two years — including tax cuts — the economy would be in vastly worse shape. Likewise, if the federal government begins laying off tens of thousands of workers now, the economy will clearly suffer.

The early returns suggest the Germans were. The American stimulus package was supposed to create a “summer of recovery,” according to Obama administration officials. Job growth was supposed to be surging at up to 500,000 a month. Instead, the U.S. economy is scuffling along.

The economy can’t be played like a piano — press a fiscal key here and the right job creation notes come out over there. Instead, economic management is more like parenting. If you instill good values and create a secure climate then, through some mysterious process you will never understand, things will probably end well.

With its modest stimulus winding down, Germany’s growth slowed sharply late last year, and its economic output still has not recovered to its prerecession peak. Output in the United States — where the stimulus program has been bigger and longer lasting — has recovered. This country would now need to suffer through a double-dip recession for its gross domestic product to be in the same condition as Germany’s.

“It’s really quite striking how well the U.S. is performing relative to the U.K., which is tightening aggressively,” says Ian Shepherdson, a Britain-based economist for the research firm High Frequency Economics, “and relative to Germany, which is tightening more modestly.” Mr. Shepherdson adds that he generally opposes stimulus programs for a normal recession but that they are crucial after a crisis.

It’s pretty much a guarantee that any argument involving the idea of government as parent will be a faulty argument.

No one could have predicted that Paul Krugman would be right about austerity.

David Leonhardt is speaking simple economic truths in what must sound like a foreign language, given the tenor of debates over the past few months. Standard economic theories haven’t applied in Washington for a while, so Leonhardt’s essay has the force of the running man throwing the hammer into the Big Brother TV screen in the famous Apple 1984 commercial.

Leonhardt manages to mention that GDP is still growing too slowly in the US for mass hiring, even with a higher growth rate than Germany. He manages to note the state and local cuts that will blunt recovery. He manages to look at interest rates, which are historically low, and reason that government spending is not crowding out the private sector in any way. He calls John Boehner a liar for saying the federal workforce has grown by 200,000 employees since Barack Obama’s tenure in office (it’s about 1/4 that). He says that the problem right now is a lack of demand. He cites the much better example of Britain, which has gone whole-hog for austerity and seen negative job growth and negative GDP growth since.

I’d like to think that this kind of truth would, like resuscitating a dying patient, shock the political class back to life. More likely it will just fall down the memory hole, drowned out by the bipartisan cries of “we all want to cut spending.” The unemployed are still invisible, economic theory is still upside down, and one article won’t change that.

It would be nice if it did.

What do we learn from the correlation between states with the worst housing bust and budget shortfalls? If U.S. economic growth slows, the federal deficit situation will get worse. Republicans believe that cutting government spending will spur economic growth. But the evidence we have from countries that have attempted such a strategy since the Great Recession began to ebb — Germany and the United Kingdom — suggests exactly the opposite. Austerity policies are not the right medicine for a fragile economy.

One of the best aspects of being a journalist is that you get to talk at length to the most knowledgeable and interesting experts on just about any subject you can think of. For me, yesterday was a prime case in point: a long and fascinating lunch with James Macdonald, the author of my favorite book on the history of sovereign debt. Turns out he also has a microscopic vineyard in Tuscany, so the conversation ebbed wonderfully from economics to wine and back.

Macdonald has an economic historian’s view of the current austerity debate, and he was very clear: if you look at the history of countries trying to cut and deflate their way to prosperity while keeping their currencies pegged, it’s pretty grim — all the way back to Napoleonic times. Sometimes, the peg is gold. For a good example of the destructive abilities of that particular peg, look at the UK in the 1920s, which Macdonald says was arguably worse than the US in the 1930s: shallower, to be sure, but substantially longer. The devaluation of the pound, when it finally came, was very long overdue.

At other times, the peg is simply political: Macdonald gives the example of southern Italy being locked into what was essentially the Piedmontese monetary system at the time of the Risorgimento. That might have been well over a century ago, but there’s a case to be made that it has hobbled just about everywhere south of Rome to this day — and that’s in a country with about as much internal labor mobility as between EU countries.

So from a historical perspective, the prospects for countries like Portugal, Ireland and Greece are pretty grim. They can cut their budgets drastically and stay pegged to the euro, but most of them would be better off in the position of Iceland, which can and did devalue in a crisis (and allowed its banks to default, too). So far, the Baltic states have stuck to their deflationary guns with the most determination and discipline, but such things work until they don’t: at some point it’s entirely possible that Latvia or Estonia could pull an Argentina and kickstart growth by devaluing.

I’m sure that, in the light of this new evidence, American conservatives will undertake a thorough rethinking of their anti-stimulus beliefs. After all, as they told us at the time, this was a natural experiment.