Tag Archives: We Choose The Moon

Hey, Andy Did You Hear About This One? 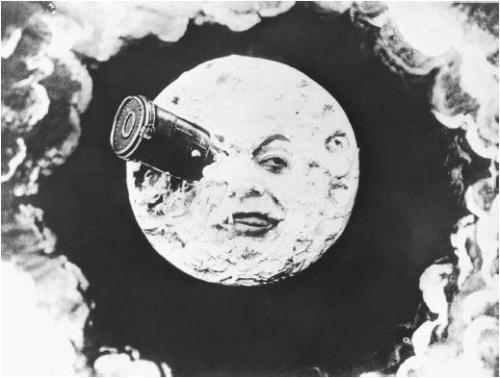 The 40th anniversary of Apollo 11. There’s a website, We Choose The Moon.

Next week marks the 40th anniversary of the first moon landing. We say we will return in 2020. But that promise was made by a previous president, and this president has defined himself as the antimatter to George Bush. Moreover, for all of Barack Obama’s Kennedyesque qualities, he has expressed none of Kennedy’s enthusiasm for human space exploration.

So with the Apollo moon program long gone, and with Constellation, its supposed successor, still little more than a hope, we remain in retreat from space. Astonishing. After countless millennia of gazing and dreaming, we finally got off the ground at Kitty Hawk in 1903. Within 66 years, a nanosecond in human history, we’d landed on the moon. Then five more landings, 10 more moonwalkers and, in the decades since, nothing.

To be more precise: almost 40 years spent in low Earth orbit studying, well, zero-G nausea and sundry cosmic mysteries. We’ve done it with the most beautiful, intricate, complicated — and ultimately, hopelessly impractical — machine ever built by man: the space shuttle. We turned this magnificent bird into a truck for hauling goods and people to a tinkertoy we call the international space station, itself created in a fit of post-Cold War internationalist absentmindedness as a place where people of differing nationality can sing “Kumbaya” while weightless.

As America celebrates the fortieth anniversary of its first visit to the Moon, it seems reasonable to reconsider the broader significance of this event. On one level, the 1969 moon shot was the ultimate in hyper-expensive vanity projects, a bright, bold move that inspired the country, impressed the world, and resulted in untold scientific advancements. It’s hard to quantify the intangible benefits of the program; even now, for a certain segment of the populace, part of the wonder of the moon lies in the fact that it holds a wire-impregnated American flag that is eternally flapping in a nonexistent breeze.

[…] For a generation that is too young to remember World War II or the Apollo landings, nationalism seems cheesy and threadbare. A renewed space program could be the first step toward a renewed sense of non-religious, non-partisan national destiny.

If American astronauts go back to the moon, they will probably do so in an Orion capsule, atop an Ares rocket. It would cost between $28 and $36 billion to put these components into space by the end of 2010. Flying three missions per year through 2015 would run an additional $14 billion.

The usual — and, admittedly, relevant — arguments against a new space program generally boil down to the fact that there are numerous vital projects that need to be done on planet earth, any of which would benefit from the infusion of $28-$50 billion. On the other hand, it’s also worth noting that the Fannie Mae/Freddie Mac bailouts will ultimately cost between $25 billion and $2.5 trillion, depending upon who is doing the accounting.

Forty years on, the space program is still struggling to figure out how to top the fabled moonshot of July 1969. Apollo 11 may have been the greatest achievement in space flight, but arguably it nearly killed the space program. Because what do you do after you shoot the moon?

You build a space shuttle. You build a space station. You launch telescopes. You dither around in low Earth orbit for decades. But no matter what you do, you find that Apollo 11 is an impossible act to follow.

Feedback from my own column on Apollo has opened my eyes to a peculiar contradiction in the conservative soul. On the one hand, as patriots, conservative Americans take great pride in our nation’s achievements. It can’t be denied that landing men on the Moon was a simply tremendous achievement. On the other hand, conservatives look askance at big, expensive federal programs, and the Apollo program was surely one such.

The cognitive dissonance thus engendered has produced some very tortured logic among my e-mailers. A common argument is that by demonstrating our aerospatial-technological superiority to the Soviets, Apollo helped win the Cold War. I can’t myself see any evidence that Apollo advanced our victory in the Cold War by so much as fifteen minutes, and nobody has anything concrete to offer. The U.S.S.R. decayed on its own domestic timetable, with very little reference to what we were doing. So it seems to me, anyway. Contrariwise to the Apollo argument, our humiliation in Vietnam should have enormously encouraged the Soviets; but I see no real sign of that, either. They just went on slowly crumbling.

Huginn and Muginn at Daily Kos:

Looking back, it also seems as if that was the last great moment I can remember of national, or international unity — a moment in which we were drawn together not by sorrow, or shock (as on 9/11) but one in which we were united by joy and the giddy thrill of human accomplishment. Sure, there were those who claimed this as a uniquely American moment, and in some ways it was that. But even for Americans, this was not a political moment; it was neither Republican nor Democratic — NASA was born in a Republican administration and boosted by two Democratic ones. Even though Nixon was President at the moment of the moon landing, it was not his moment to take credit (and — amazingly enough, he knew this). The landing was, in all the ways that really counted, a triumph that transcended nationalism. (“One giant leap for mankind.”) They celebrated in the streets of London, Paris, Tokyo, and elsewhere, as enthusiastically as we did in Times Square.

Yes, I know that the moon program was driven in large part by the dynamics of the Cold War. But the greatest legacy of the program is that it allowed us to look back at ourselves — the small blue marble — and see that what brings us together is much bigger than what sets us apart. It was that moment — an entire planet with its hopes and dreams embodied in two men walking on another world — that contributed in great part to the environmental movement, not to mention a generation of children that would grow up embracing technology and its ability to solve the world’s problems. And, of course, Tang.

Will these decisions ultimately ground mankind? Will we never set foot on the moon again – or on Mars ever? That doesn’t seem likely. If we don’t go, someone else surely will. It’s human nature, and Americans are hardly the only ones on this planet: We’ve been cooperating in space for years with astronauts from other nations, including Russians, the people who got Kennedy’s attention. Meanwhile, Obama has ordered a review of NASA’s entire human space flight program, which is due out later this summer. I don’t know what that report will say, but I would mention three small words to the man in the Oval Office who will receive it. Yes. We. Can.

The Apollo program was grounded for nearly a year after the fire, while the command module underwent a through redesign. Apollo 4 (Nov. 1967) and Apollo 6 (April 1968) were unmanned test launches of the full Saturn V launch vehicle and command/service module configuration. Apollo 7 (October 1968) was the first manned Apollo flight. Apollo 8 (December 1968) was the first manned space flight to break earth orbit and orbit the moon. The reading of Genesis 1 by the Apollo 8 crew while circling the moon was an incredible event that spiritually united a world that had been torn apart by war and strife.

Apollo 9 (March 1969) was the first mission flown with the Lunar Module. The astronauts successfully extracted the LM from the third stage of the Saturn V, orbited the earth with the command/service module (CSM) and LM docked, separated the LM and tested its engines, and performed several space walks. Apollo 10 (May 1969) set the stage for the moon landing. The full spacecraft (CSM and LM) left earth orbit, orbited the moon, separated, and the LM crew descended to within 8.4 nautical miles of the lunar surface.

And in July 1969, the first mission to actually land a manned space craft on the moon was a “go.”

To send men to the moon, a much larger rocket engine was going to be needed. In 1960, the Marshall Space Flight Center, led by NASA’s chief rocket scientist Wernher Von Braun, determined via early calculations that they would need to design a multi-stage rocket with over 7 million pounds of thrust in its boost stage — this was many orders of magnitude above what was currently available. It eventually fell upon Rocketdyne to design a RP-1/LOX engine, eventually designated the F-1,  which would have 1.5 million pounds of takeoff thrust apiece. Five F-1s would be used on the S-IC first stage on the Saturn V, which would have a combined thrust of 7.5 million pounds.

NASA had just under 10 years in order to satisfy Kennedy’s edict to get men on the Moon. Fortunately, Rocketdyne had already done a lot of the groundwork and gained a lot of experience with Atlas, Jupiter and Thor, and had begun early development of a prototype high-thrust rocket engine for the Air Force even before NASA asked for engines with the specifications for the Saturn V boost stage. Rockedyne was testing early prototypes of the precursor to the F-1 as early as 1959. The problem now was scaling up those engines and designing turbopumps that could handle the 40,000+ gallons per minute each giant F-1 engine would consume.

Mr. Armstrong is still alive, and, as far as I know, in good health.  But alas, one day, like all of us, Armstrong will shuffle off this mortal coil.  When he does, his passing will no doubt be news – it will lead on all of the broadcast and cable news programs, and decorate the front pages of the daily papers.  He might even for a brief moment replace The Chosen One’s smiling visage on the covers of the etiolated news weeklies which grow thinner in size and substance with each passing week.

But will millions tune in to watch the funeral proceedings from across the globe?  Will thousands descend into the streets in tears, inconsolable at the loss?  Will there be a sports arena filled with famous and non famous mourners, gathered to celebrate his life?  Will models and preachers and sports stars proclaim his heroism?

Doubtful, I should say.

Peter Lawler at PomoCon on Wolfe

Four years before I was born, man walked on the moon for the first time, the most magnificent single feat our little tribe of East African Plains Apes has ever managed.   Now we don’t even do that.  What happened to the dream?  Government mismanagement, yes, but something more than that, too, some failure of imagination and will.

I hope that by the fiftieth anniversary some people, somewhere, will have regained the momentum that pushed mankind into our first tenative baby step towards the stars.